Edit
watch 01:40
The Sandman Will Keep You Awake - The Loop
Do you like this video?
Play Sound

The AK-47 is an assault rifle that appears in Spec Ops: The Line.

It has a 30 round magazine and the option to swap between burst and full-auto fire. It is commonly used by both the 33rd and Emirati refugees.

It can first be found in Chapter 1 and is used very commonly in every subsequent chapter until 14.

If the player uses Select Chapter, the player will be equipped with this weapon as the primary weapon for Chapter 4.

In multiplayer, it is unlocked at Level 9. 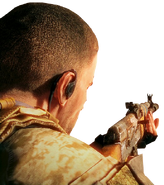 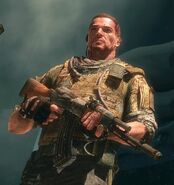 A player firing with an AK-47 in multiplayer.