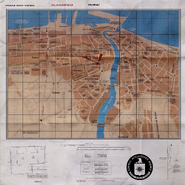 A CIA-produced map of east Dubai. Note the marks indicating that the 33rd have occupied the Department of Communication building, another building that does not exist in modern Dubai.

Konrad observing the ruins of the city,
Community content is available under CC-BY-SA unless otherwise noted.
Advertisement