Executions are a finishing attack that players can perform in Spec Ops: The Line.

In the campaign, after meleeing or wounding an enemy soldier, the player can press the melee button again while standing over them to finish them off. This rewards the player with a small amount of extra ammo for both of their weapons.

In the multiplayer, this attack can be performed after incapacitating the opponent, and will grant extra points and experience.

In order of least brutal to most brutal:

An execution in multiplayer.

Walker executing a 33rd by bashing his weapon stock against the soldier's head. 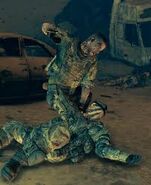 Walker executing a 33rd by punching him in the head.
Community content is available under CC-BY-SA unless otherwise noted.
Advertisement