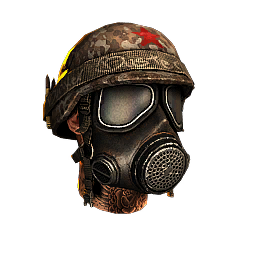 The Gassed kit is a Head Kit available in Spec Ops: The Line's multiplayer.

The kit consists of two parts: an M40 gas mask and a combat helmet. The helmet has a desert camouflage cover, with the United States Marine Corps anchor emblem on both sides, as well as a skull painted on the back. The helmet has an elastic cover band on it, pinning three 5.56 rounds to the right side of the helmet, and the phrase: "Bunker Buster" written on it. Finally, a red star is painted on the front of it.

It is available to The Exiles' Gunner class from Level One if the player has the FUBAR Pack.