"Sure, I speak six languages. Gimme a broken radio and a paperclip, and I'm MacGuyver. I can deadeye a squirrel at 2000 meters. And, to top it all off, I'm the sexiest thing ever poured into a pair of ACUs."
— Lugo on himself.

John Lugo is the tritagonist of Spec Ops: The Line and a member of Walker's squad. He is often seen carrying a Scout Tactical and a TAR-21. He is the squad's designated marksman and medic. Outside of combat, Lugo is depicted as the team's engineer and a translator.

Early in the game, Lugo shows distaste for the mission and often jokes on every situation they are in. As the game progresses, Lugo begins to show some extreme disapproval towards Walker and his orders. He also clashes with Adams on several occasions, namely on the team's association with the CIA within Dubai.

Later in the game, Lugo is captured and hanged by a mob of refugees angered at Delta Squad's and Grey Fox's actions. His death may cause Walker and Adams to kill the some of the refugees that they are supposed to be saving.

Later in the mission "The Bridge," Walker has a hallucination of an AA-12-wielding Heavy Trooper as Lugo. "Lugo" then yells at Walker, saying, "You left me to die!" while "he" attacks him showing Walker blames himself for Lugo's death. When "Lugo" is killed he says "The only villian here is you, Walker".

Like Adams, Lugo has a special ability: when Walker orders a target to be attacked at long range Lugo will pull out his Scout Tactical and eliminate the enemy, making him better at killing targets in the wide open and useful for when the player has close-range, inaccurate, and/or weak weapons.

Lugo holding a TAR-21 in the company of Walker and Adams.

Lugo (center) with Walker and Adams.

Walker and John at the end of a huge canyon

Lugo on the left while Walker holds the dying soldier

Lugo's appearance from an older build of Spec Ops: The Line. 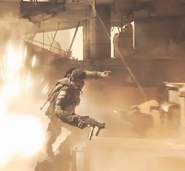 The older build of Lugo from the Debut Trailer. Notice his cap is backwards and the UMP 45. 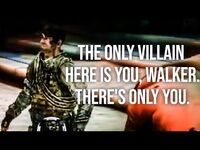 The only villain here is you, Walker. There's only you. (Hallucination of Lugo) - Spec Ops- The Line
Community content is available under CC-BY-SA unless otherwise noted.
Advertisement