The M4A1 is an assault rifle in Spec Ops: The Line.

The M4A1 is an all-round weapon with low to medium damage balanced by a high fire-rate, magazine size, and accuracy. It can be equipped with a suppressor, making it useful for stealthy engagements. It has a large 40-round magazine in the campaign, but only 120 spare rounds, so the player can burn out their ammunition quickly if they are not conservative with their shots. In early chapters, when fighting against the refugees, ammunition for the M4A1 can only be obtained from ammo crates and Executions. However, it eventually becomes one of the most common weapons in the game, and is frequently used by members of the 33rd.

It can be found in every chapter outside of Chapter 2 and 3.

The M4A1 appears in multiplayer, being unlocked at Level 27. It is equipped with a 30-round magazine, as well as being able to carry 120 spare rounds. Unlike the one in the campaign, the suppressor cannot be equipped in multiplayer. 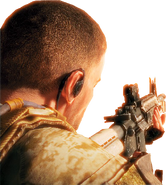 Aiming with the M4A1. 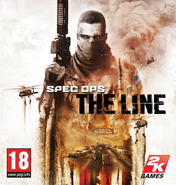 The M4A1 as seen on the cover. 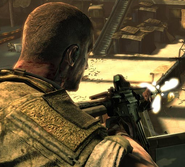 An early screenshot of Walker firing a different version of the M4A1.