"Our mission went from recon to rescue the minute we found US soldiers butchered."
— Martin Walker.

Martin Walker is the playable character, main protagonist and true villain of Spec Ops: The Line.

He is a member of the United States Army's Delta Force. He and his squad are tasked with searching for any survivors left in Dubai, after receiving a message from Colonel John Konrad detailing his failed attempt at evacuating the city. Walker shows great respect for Konrad and expresses strong feelings of trust towards him throughout the game.

As the game progresses, Walker's mental stability slowly begins to deteriorate under the psychological strain caused by the repeated atrocities he and his squad are responsible for committing.

There are four possible conclusions regarding Walker's fate. 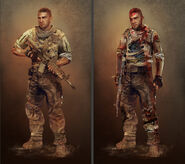 A concept art of Walker; showing both his regular and battle-wounded apparel.

Walker and Adams looking over the desert. 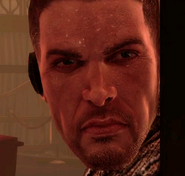 Walker looking over a memorial for the 33rd Infantry.