The Micro 9mm is a weapon that appears in Spec Ops: The Line. It is often carried by Emirati refugees. It shares ammo with the M9. 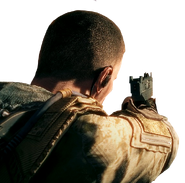