Edit
watch 01:40
The Sandman Will Keep You Awake - The Loop
Do you like this video?
Play Sound

The SCAR-H is an assault rifle that appears in Spec Ops: The Line.

The SCAR-H first appears in Chapter 2, lying on the ground just before the ambush at the hotel. Why this is here is unknown, as there is no sane reason for it to be there, unless some refugee picked it up from a dead 33rd soldier and was killed by Delta. After this it does not reappear again until the very late game, Chapter 13, in which it becomes extremely common. It is often used by elite 33rd soldiers, though it can still be used by regular 33rd soldiers as well. It has an underslung MK 13 grenade launcher which can be useful for taking out groups of enemies at range.

If the player selects Chapter 14 from Chapter Select, Walker will be equipped with this weapon along with a M1014.

It is unlocked at level 33. It does not retain the MK 13 grenade launcher attachment. 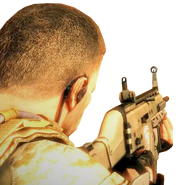 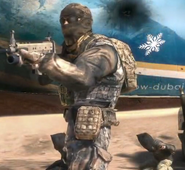 A 33rd soldier wielding a SCAR-H with an underbarreled grenade launcher. 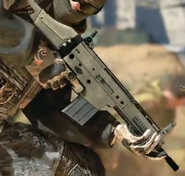 The SCAR-H without the grenade launcher mentioned above.