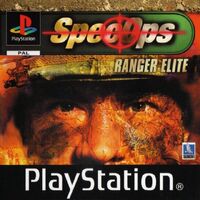 Spec Ops: Ranger Elite is a third-person squad-based tactical shooter released on April 29th, 2001. This was one of the last in the Spec Ops series before it took a 9 year hiatus. The game, as aforementioned, is played from a third-person perspective. The player takes control of the squad "leader," and one back-up squadmate. There are five different soldier types, which include rifleman, sniper-recon, machine-gunner, grenadier, and close-combat fighter. Each class may be customized with varying weapon and item loadouts, M16 assault rifles, M249 machine guns, grenades, satchel charges, medkits, and more. The squad commands in the game consist of conventional tactical game staples, such as "Follow Me" and "Move Up." The player may also command his partner to target enemies and to use or setup explosives.