The UMP 45 is a submachine gun that appears in Spec Ops: The Line.

The UMP 45 can be found being used by 33rd Infantry soldiers.

It first appears during 1st Lieutenant McPherson's ambush in Chapter 4. After that, it is a very common weapon through the rest of the game.

It is a very lightweight weapon that can also deal out massive damage.

If the player uses Select Chapter, the player will be equipped with this weapon as a secondary weapon for Chapter 4, Chapter 5, Chapter 7 and Chapter 10.

It is unlocked at level 1, making it available from the beginning of the game. 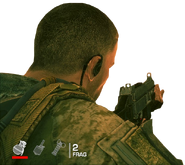