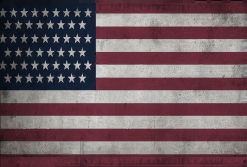 The United States of America (commonly abbreviated as US or USA) is a country in North America.

Most, if not all, of the United States' history remains the same in the Spec Ops universe. However, the key point of divergence is when, at some point in the 21st Century, it begins withdrawing from Afghanistan. Due to the chaotic nature of the pull-out, John Konrad suffered a loss of face and, seeing a need to redeem himself, volunteered his entire battalion to help with the evacuation of Dubai, thus setting up the events for Spec Ops: The Line.

At some point before Spec Ops: The Line, a 51st state, likely Puerto Rico, joined the United States, as can be seen on the flags hanging around Dubai.

The United States armed forces are broken up into three branches: the Army, the Navy, and the Air Force. Most of the playable factions within the Spec Ops series belong to one branch of the armed forces, including the Army Rangers, the Green Berets, and Delta Force. Outside of playable factions, the 33rd Infantry Battalion is a US Army battalion, while Falcon One is a Marine Corps task force sent to help evacuate Dubai.