The W1300 is a pump-action shotgun that appeared in Spec Ops: The Line.

It is can be picked up as early as the first chapter and appears in every chapter until chapter 13. It is initially carried by refugees, but 33rd Infantry soldiers also carry this.

While using the W1300, the player does not need to aim to bring up the crosshairs.

If the player uses Select Chapter, the player will be equipped with this weapon as a secondary weapon for Chapter 8, Chapter 9, and Chapter 12. 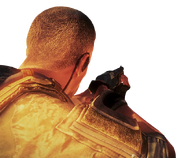 Walker with a W1300 on his back
Spec Ops: The Line Weapons
Community content is available under CC-BY-SA unless otherwise noted.
Advertisement