The Zulu Squad is the 33rd Infantry's elite fighting force. They were first seen in Chapter 10 when Riggs was picking the Aquatic Colosseum door's lock. After that, they continue to appear multiple times in the campaign. They can easily be distinguished by their black and orange armor with white spray-painted skeletal iconography. Their presence can be detected by listening to their audible radio conversations.

They are equipped with heavy body armor and plate carriers, allowing them to absorb more damage than regular foes. They are usually calm and collected in battle, shouting less frequently and only using a few words when talking to their squadmates, such as "Flank them" or "Eyes on target" or "Eyes wide" rather than other soldiers who will shout orders to each other. This may be due to the fact that they are only the 33rd unit who communicate by radio in combat. In game, Riggs tells Delta Squad that the Zulu Squad are "The 33rd's final solution to any and all of life's problems."

Many are equipped with P90 submachine guns, but they can be found with other elite weapons later in the game. 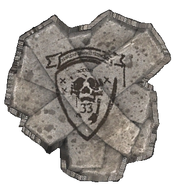